The sight of a hundred animals stampeding towards you can be terrifying. But in Cash Stampede, you can go ahead and run along with them in your quest for those amazing cash payouts. Try this fun slot game to catch some animals and trap some cool earnings at the same time.

Cash Stampede comes to you from NextGen gaming, that old favourite of casino players, everywhere. The cash slot has 5 reels, 3 rows and 243 paylines. That means you can form a winning combination by just having similar symbols next to each other on the reels. These are some of the best kinds of games to look out for, as seasoned casino players know, as they’re the ones with the most winning potential given that you can look across reels for your winning combination.

Along with huge herds of stampeding animals, the game also features a lot of purple thundering clouds and rock music playing in the background. So, it has a feel of a rock concert with some wild animals thrown in. The game goes with the animal theme, keeping you feeling powered throughout and even uses animals as the game symbols. You have to catch them if you want to be making any money with this one.

The bonus features in the game include the Cash Stampede respin feature and the Free spins bonus. The Cash Stampede respins are the sticky wilds that accumulate if you get a wild symbol to form a winning combination consisting of either the elephant, rhino, antelope, buffalo or horse, so you can get a complimentary respin. There is also the free spins feature that gives you eight free spins every time you get three or more of the scatter symbols across the reels. There are no multipliers in the game’s free spin feature. That said, you can trigger some more respins and if you have wilds on your reels, there’s no dearth of cash that you can make on the game. 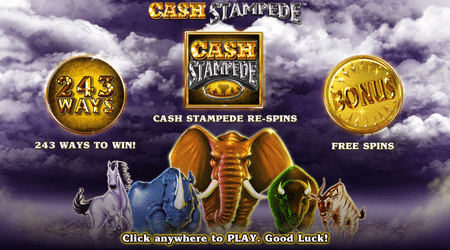 There’s never a dull moment when you are out in the desert and out of nowhere, there are herds of wild animals thumping the crowd helter-skelter. All you need to do is to harness them in the game to make your money. Cash Stampede has an RTP of 95.27%, which makes it a pretty good game to be spending your money on. The graphics are also very clear and draw you into the game. If you like some electric guitar, there’s plenty of that in the background score of the game. You can certainly win a lot as well with the sticky wilds feature and the free spins.