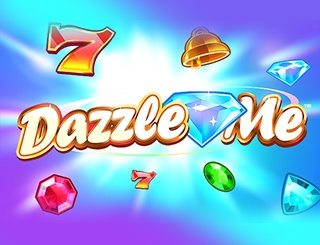 Like its name suggests, Dazzle Me is a slots game that will dazzle you with the brilliance of all the gemstones that make up the game’s playing surface. The rest of the game has the charm and attraction of a conventional slot, with the exception of a somewhat odd shaped reel structure that somehow makes winning a better possibility.

Shiny reels with Dazzle Me Slot

Sure, Dazzle Me has the look and feel of those early smartphone games where you had jewels all over the place that you had to line up to make a winning line. And yes, Dazzle Me at first glance seems no different from any of these games. However, once you get into the game you realise that NetEnt has once again lived up to their player’s high expectations and given a game that is designed to satisfy. The game certainly is colourful and bright, so there’s plenty to keep you awake with this particular slot machine offering.

The game has 5 reels but its uneven structure gives you 76 paylines. You have an upbeat soundtrack that plays as you spin the reels and any time you win that music plays a whole lot louder, with a lot of dazzling effects thrown in, so that you really sit up and take notice of your win. This is the game’s dazzling wilds feature, which can turn any of the reels from 1 through 5 wild, so that you can make a winning combination.

You can activate the free spins feature in Dazzle Me by getting three or more free spins symbols anywhere on the reels. If you get three symbols, you get 8 free spins; four symbols give you 12 free spins, and five symbols get you 16 free spins. You also have a linked reel feature where one of the reels will mirror another one of the reels. You can also get some stacked symbols as the reels spin that will further increase your winning opportunities.

Why play Dazzle Me?

If you want a bright, cheery game that will give you some small but regular wins that you can look forward to, then Dazzle Me is just the game you are looking for. It isn’t too adventurous or thrilling, and the game feels rather conventional also. It is a medium variance game so you can look forward to some good wins if you play it right. Dazzle Me feels a lot like some of the other gem based slot games like Starburst, but in the end, there is plenty of action to look forward to with all of the dazzling bonus features thrown in.