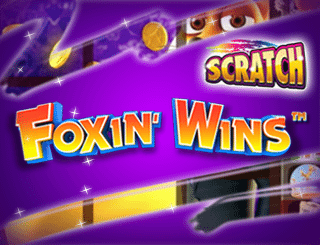 Foxin Wins Scratch is yet another wonderful mobile casino scratch card game on Slot Fruity from the NextGen gaming giants. Those of you who enjoyed the original Foxin’ Wins casideposit bonus game, or its fabulously swanky Foxin Wins Again top slots sequel will undoubtedly recognise many of the characters in this game. Those of you who haven’t encountered the suave but cheeky Mr Fox is in for a treat: Scratchcard pay with phone bill SMS now means that you can play for real money to claim instant cash prizes.

This online cash game serves as the digital version of the traditional scratch Cards (or ‘scratchies’) which we’ve all bought/received at some point or another. The Foxin Wins Scratch is easy to play as one only needs to scratch Card by means of a computer mouse so as to reveal the prizes. There are lots of big prizes to be won at Slot Fruity and the same time the game promises to be highly entertaining.

The entire purpose of this game is based on scratching the box coatings; which hides lots of brilliant prizes. You just use the computer mouse to scratch. How easy is that? Once the box has been revealed, the player can find out the money or prizes that have been won. You can pay for the scratchcard using phone bill SMS and wins lots of prizes.

The minimum bet amount that can be staked for this game is £1 while the maximum amount can be as much as £200. The up and down button feature will allow a player to decide on whether to bet higher or lower. The returns for Fox Wins Scratch game is as high as 1000:1. This implies that a betting stake of £1 could lead to a win online casino bonus of £1000. Wins can be in the form of real money, big prizes, free Scratch Card games and lots more.

The reveal all button is used to scratch all the given boxes simultaneously so as to reveal all the hidden symbols. This serves as the quickest way in which the player can know if anything has been won. For those who would like to skip this option; the computer mouse can be used to swipe each of the boxes on one by one basis.

This game even gets easier if use is made of the auto play button. The player can set the staked amount and then by pressing the autoplay button; the consecutive range of games that can be played will then be displayed. This can be 5, 10, 15, 20 and 25 games. The next thing to do will just be to choose on the preferred number of consecutive games then watch as all the magic unfolds.

The autoplay function can also be interrupted by simply pressing the Play button after which the player will be shown the number of games remaining.

The Foxin Wins Scratch Card pay with phone bill SMS at Slot Fruity also comes with a demo version in which players can get a scratch Cards bonus to simply enjoy the game for fun. After that, real money wagers can be made using casino slots deposit Bonus by phone features for quick and easy casino top-ups! Happy Scratching!