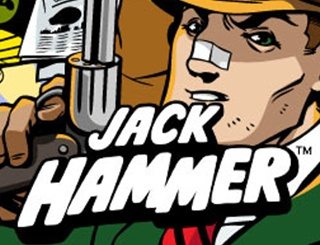 You can relive your fondness for comic strips, with this colourful comic themed slot game. Jack Hammer is our hero and has to save the city from a mad scientist. You can get immersed in this cartoon slot and help the private eye so that you can make some real cash on the way.

From strips to slots

Jack Hammer has 5 reels and 25 paylines, and is based on the adventures of our super sleuth, Jack Hammer, as he tries to foil the plans of the evil Dr Wuten. There are plenty of interesting characters in the game, complete with cartoon animations you would expect to see in a comic strip.

The game features some great bonus features, one of which is the sticky wilds feature. If you win a wager, you can activate the sticky wilds, so that the wilds stay in place while the rest of the symbols on the reel are spun. These reels keep spinning until you make a winning combination. While this feature seems attractive, you need to wager a high amount and also spin the reels several times before you can see any good cash coming in. 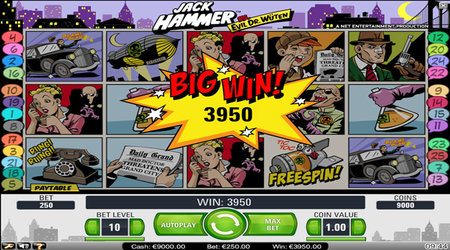 Jack Hammer is a great game for comic book lovers who like to see some of those BAM!, KAPOW! type speech bubbles in the middle of their game. It’s the kind of game that can appeal to both low variance players as well as high rollers, simply because of the wager amounts that can be made. This slot has enjoyed popularity among players mainly because of its sticky wilds feature, so that is certainly something to get your teeth into. The original game was so popular that a sequel to this game is now available, called Jack Hammer 2: Fishy Business. But as they say, nothing compares to the original, so it’s a great game to try out before you move on to see what the new version of the game has to offer.