The slot game of Mega Moolah by Microgaming Inc. is complete with all which is required to elate you to the core by providing an experience whether it might be your first one or if you have been a regular visitor of the casino slot gaming zone. The distinct graphics, even with an average RTP of 88.12%, manages to attract players due to the progressive jackpots feature that it offers which can prove to be life-changing for a lucky few.

Microgaming Inc. is the whole and sole owner of this amazingly crafted slot game– Mega Moolah. The team of developers are based in the Isle of Man, which is a small crown dependency between England and Ireland. Across their palette lie a whole range of games created out of themes like animals, fairies, dolls, spies, water bodies, history and what not! Thus, they promise an out and out enjoyment to players with varying interests, in their games.

Mega Moolah is laid across in a 5×3 reel set. With twenty-five paylines, it is not very difficult for a player to earn some quick money since the rules are also pretty simple. It also has an additional wheel of fortune mega bonus by which you can earn if you guess the correct number on the pointer of the wheel. 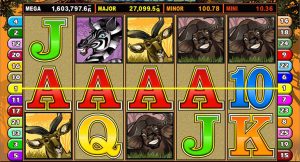 The wild symbol or the lion ensures a multiplier of 2x of the win money if it appears minimum in a set of two in the active payline. The appearance of 2, 3 or 4 lions in a winning line earns you 15, 125, and 1500 coins respectively. The betting ranges from 1 to 5 per payline. Also, if the wild appears in any of the winning line, the win amount gets doubled.

The background spots a lush green forest with symbols of animals like giraffes, elephants, antelopes, buffaloes, zebras, and monkeys hopping on the reel sets. The scatter symbol of a monkey helps in generating 15 free spins if at least 3 of them appear together. The player can get further free spins on top of these 15 if the monkeys again appear in set of 3 during the first set of free spins played. The playing cards from nine to ace are also used as symbols in this game. Also, the betting amount gets tripled during the free spins round.

The upsurging interest in this slot clearly comes due to the host of bonus features in this game, the mega jackpot proves as an icing on the cake. The game is attracting many casino lovers.