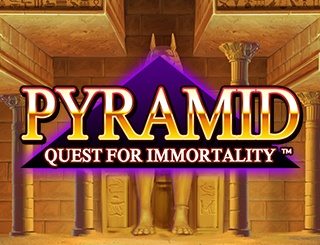 Pyramid – Quest for Immortality is a slot game that transports you to ancient Egypt, back to the time of the mummies that were buried within the pyramids and who had all of their treasure buried along with them. There are several bonus features to entice players with this game.

Pyramid – Quest for Immortality is a unique offering from NetEnt, the same developers that have given us some great games in the past like Gonzo’s Quest and Spinata Grande. You can be sure to have some of the similar great looking graphics and action in this slot game as well.

The game has a whopping 720 ways to win and is played on a pyramid-shaped set of reels with 5 reels arranged in a 3-4-5-4-3 formation. Therefore, there are more ways for you to make winning combinations and win a lot of cash in this game.

Pyramid – Quest for Immortality itself plays out with an Egyptian theme, wherein you are inside a pyramid, one of those ancient burial chambers for the Egyptian Pharaohs. The treasures within the pyramid are guarded by the gold statues of Horus and Anubis so you have to avoid waking them up and incurring their wrath.

As with Gonzo’s Quest, Pyramid – Quest for Immortality has an Avalanche feature, which acts as a special feature in this game. Therefore, you have the various symbols tumbling onto the reels instead of spinning as with a traditional slot game. Every time you get a winning combination, the symbols disintegrate to make way for more symbols to fall in their place. For every three Avalanches, you get an increase in the multiplier, up to 10x.

Even though the game lacks the free spins feature, it does have high volatility so you have a huge earning potential. You can also win by getting wilds in reels 2, 3 and 4, and this wasn’t as hard to achieve as it may sound.

Why play Pyramid – Quest for Immortality?

Pyramid – Quest for Immortality features some eerily cool game visuals that really make you feel like you’re back in the land of the Pharaohs. The Avalanche feature is always a welcome way of winning and the wager multipliers really help to hike up your winnings. It keeps you on the edge of your seat and makes you want to jump for joy when you do strike it big.  You can win as much as 36,000x your initial wager with 720 ways to win, so there’s real opportunity in here for those who like to raise their stakes.